Comprehensive Sponsors are critical partners in our success in fulfilling our mission. Comprehensive sponsors are asked to give their 2021 gifts at the beginning of the year to be recognized as GCA sponsors throughout the entire year. With the uncertainty in our funding due the pandemic, your support is even more important than ever to cover a major portion of our operating budget, and to provide scholarships to deserving girls to participate in our programs. Each sponsorship level includes recognition and reservations to our events so you can stay up to date with what the GCA has been doing to help transform the lives of girls in West Michigan. We are hopeful that we can provide some version of each of our normal events this year, but due to COVID-19 plans are still subject to change according to CDC guidelines to keep our donors and girls in our program safe. You can learn more about our current plans for each of our events below:

“Raise Your Voice” Hosted Events- Instead of our usual in person spring luncheon, volunteer hosts will have the option to host a virtual watch party, or invite guests to their home or business to watch our virtual event together. During this half hour event, our guests will have an opportunity to learn more about the GCA, hear from our Executive and Artistic Director Lori Tennenhouse, listen to our girls sing, and learn about the impact of our programs from a parent. Guests will be asked to make a donation to support our cause. Gatherings can be scheduled by the host anytime in the month of June or July.

“Let Their Voice Be Heard” Benefit includes a cocktail reception, dinner, and entertainment. In this festive environment we celebrate the GCA and honor a Grand Rapids woman who is a community leader and an excellent role model for the girls we serve. This year’s Honoree is Sandi Frost Steensma, President and Chief Executive Officer, Kennari Consulting. We are currently planning for an in-person benefit on Wednesday, November 17 from 5:30 p.m. to 7:30 p.m. at Watermark Country Club.

High Notes Home Cabaret is our exclusive donor appreciation event for our High Notes donors, who give $1,000 or more each year. This summer event will feature a short outdoor performance from one of our singers and an opportunity to learn more about the GCA from Lori Tennenhouse.

Questions? Contact the Girls Choral Academy at 616.361.6111 or email angela@girlschoralacademy.org 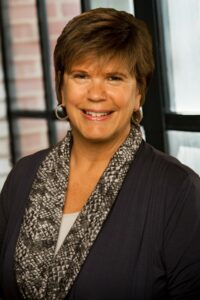 Sandi Frost Steensma is President and Founder of Kennari Consulting, a regional fundraising consulting firm specializing in capital campaigns, annual fundraising, planned giving, endowment fundraising, strategic planning and grant writing. Sandi has more than 25 years of experience in successful fundraising serving as a consultant and/or serving agencies. She worked as a consultant for another regional firm for eight years prior to founding Kennari Consulting in 2007 and served Hospice of Michigan as statewide Corporate Director of Development and as Executive Director of the Grand Rapids office.

Sandi has worked with many types of non-profit agencies including arts organizations, educational institutions, health care agencies, social services agencies, libraries and associations. She has served on the Association of Fundraising Professionals Board of Directors and has trained at local, statewide and national conferences. Sandi holds her BA from the University of Colorado and her Masters of Management from Aquinas College. She is a graduate of Leadership Grand Rapids and was a 2007 Fellow in the Michigan Political Leadership program at Michigan State University.

Sandi is active in many community organizations and served as an elected Kent County Commissioner serving Cascade Township, Lowell Township, Bowne Township and Caledonia Township from 2007-2013. Her colleagues elected her Chair of the County Commission in January 2010, 2011 and again in 2012.

In January 2014, Governor Rick Snyder appointed Sandi to the Lake Superior State University Board of Control, an 8-member Board that serves as the governing board of the University. Additionally, Sandi currently serves as an active member of the Small Business Association of Michigan (SBAM) and the SBAM Leadership Council.

Kennari Consulting has received many honors including winning the Grand Rapids Area Chamber of Commerce’s 2016 EPIC Award for Woman Owned Business, being recognized as one of “50 Businesses to Watch in Michigan” by Michigan Celebrates Small Business in 2019 (and as a finalist in 2016), and as a Top Women-Owned Business from the Grand Rapids Business Journal Bi-Annual honor in 2017, 2015 and 2013. Kennari Consulting was also a 2015 EPIC Award Small Business of the Year finalist (Grand Rapids Area Chamber of Commerce).

Sandi is a 2015 YWCA West Central Michigan Tribute Award recipient. The Grand Rapids Business Journal named Sandi one of the 50 Most Influential Women in West Michigan in 2018, a bi-annual honor she also received in 2008, 2010, 2012 and 2014.  In 2001 and 2007, Sandi was named an Athena Nominee by the Grand Rapids Area Chamber of Commerce and was a finalist in 2014 and 2015. Sandi was further honored in 2011 as one of Inforum’s Inner Circle, an honor she also received in 2009. And, Sandi was named one of the Five Outstanding Young People of Michigan in the mid-1990s.

*Sandi Frost Steensma was originally scheduled to be our 2020 honoree, but we had to cancel the event due to the pandemic. We are excited to honor her in 2021!